skip to main | skip to sidebar

Its not easy keeping a work mind set when you're working from your house.  Its easy to get caught up in errands that you might normally take a half day off to accomplish.  Yesterday I booked an appointment to get the windshield replaced in my car, they guaranteed they's show up between 8AM and 3PM (and I thought the cable company was bad, at least their window is only 4 hours).  The tech showed up in the morning and by noon it was done, but with a warning not to drive it for at least an hour, not to remove the tape tacking the trim in place until tomorrow morning, and not to wash it for at least a week (not a problem since it needs bodywork after being clipped by a run away 4X4 and none of the local car washes will take it).

I worked until 1 PM then headed to the state inspection station to get it re-inspected (hence the need for a new windshield).  I had had it inspected a couple of weeks ago to make sure that it would pass with the the carnage to the passenger side left by the 4X4, and the only reason it failed was a crack in the windshield.  This should be easy, show them the previous inspection paperwork, show them the new windshield and sail right through.  It was not to be,the re-inspection line was the longest so I was directed to another line with about 5 cars ahead of me.  There were 2 guys running it and they got me through in reasonable time, considering everyone else in the line was getting a full inspection, and in what turned out to be about the same amount of time the re-inspection line would have taken.  Despite the efficiency of the inspectors it still took longer than I had budgeted for.  Hopefully I'll get better at this as time goes on.

Why my car can't go through the Car Wash 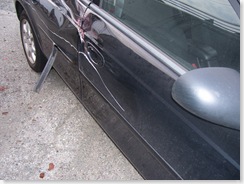 A couple of weeks ago while at the shop for new brakes, my car was side swiped by a runaway 4X4 being unloaded from a flat bed.  Its always a good idea to make sure that the vehicle on the flat bed is secured by chains or the tow cable BEFORE you tilt the bed to unload it.  It was a Saturday and the flat bed driver didn't have the courtesy to leave a note.  Fortunately the gas jockeys at the gas station across the road were good enough to phone the shop and leave a message describing what happened.  For some reason the flat bed driver is no longer employed by the towing company. Because this involved the insurance companies for the shop where the work was being done, and the towing company (who wanted me to go after the insurance company for the 4X4 owner since it was his vehicle that hit mine) its taking a while to get a check.  BTW my car is consider a "total loss" by the insurance company. 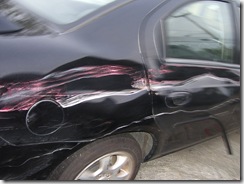