skip to main | skip to sidebar

Over the years I have collected my fair share of cast off technology.  Recently while cleaning out the basement I came across a piece of forgotten hardware and combined it with a newer piece of technology to capture some of my families past for future generations.

The cast off technology consisted of a device called an Elmo TransVideo 35 (Slide Film-To-Video Converter TRV-35) which  looks very much like a Kodak Carousel slide projector.  Rather than displaying a slide on an external screen the slide is projected onto a CCD inside the unit where is is converted to composite (NTSC) video.  By combining this with a Diamond One Touch DVD Creator I am able to capture 35mm slides as still digital images in either .jpg or .bmp formats.

Using the still image capture function I was able to capture images of hundreds of slides taken by my father and sister and will be able to share these with members of my families current generations as well as preserving them for future generations. 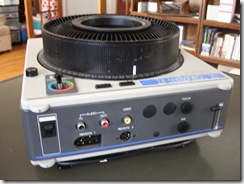 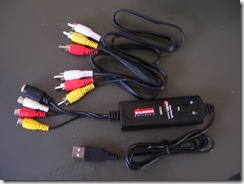 I am also in the process of capturing 8mm films that I came across during my clean up efforts using a 8mm projector and another cast off, a Panasonic 5100 HS (High Sensitivity) video camera which is connected to the Diamond One Touch.  The Diamond One Touch allows me to capture composite video in a variety of MPEG video formats (MPEG 4/2/1).  My initial attempts were done using NTSC video but I want to try S-Video as well since the camera supports it. 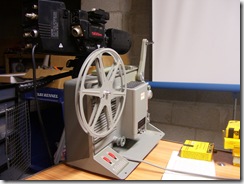 My next project will be to figure out how to ‘rip” vinyl albums into mp3 files WITHOUT having to manually enter all the metadata associated with the songs.  The challenge will be to find software that will separate the single audio file (one side of a vinyl album) into the individual songs and based on the artist and album title look up the metadata in an online database such as Gracenote and then apply it to the individual mp3 files.  If anyone has any experience or suggestions I’d appreciate their input.

Posted by Cybertactix at 8:03 PM

thnk you for sharing travesti